Forming an opinion on Guacamelee has proven to be a difficult task, and criticizing it has proven to be even harder. On one hand, it’s a pleasant-enough platformer that fancies itself among the $15 indie hoi oligoi. On the other hand, it’s just no fun. What do you say about a game like this? Do you focus on praising the solidity of its mechanics, or chastising its unengaging gameplay and flatline pacing?

Gameplay-wise, Guacamelee is a Metroidvania-lite with an intricate, combo-heavy combat system. Right off the bat you’ll be collecting abilities and puzzling over weird colored blocks in typical style, and like any Metroidvania, you’ll be backtracking to obstacles you can now overcome with a new ability. Almost all of your skills, such as a dash and a headbutt, double as combat moves and ways to break roadblocks. 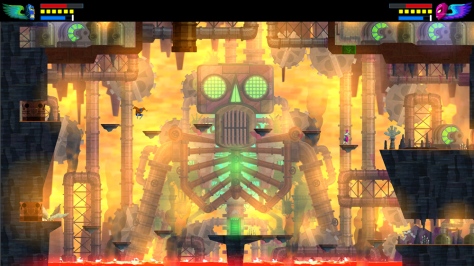 The combat, encounter design issues aside, is one of the games strongest assets. It’s extremely satisfying to do correctly, and mastery of the dodge roll never fails to make you feel like a total badass. After a combo, enemies can be grabbed and thrown in any direction, knocking over anyone they touch. The game is rife with combos, some so absurdly long they can’t possibly be used outside of the training room. Boss fights in particular are gratifying to conquer, as they all seem unfairly broken at the start and take the most time out of any activity in the game to get right. There’s even a Zelda-esque light-and-dark-world system that can be toggled on the fly, as some enemies will be in the opposite world (and will still be able to damage you).

Unfortunately for Guacamelee, the enemy shield system, combined with its arena system,  is where the combat begins to break down. Every so often, the exits to the screen will be sealed off and you’ll have to fight off several rounds of scripted spawns, which is fun at first, but eventually turns into a total disaster. Colored shields force you to single out an enemy and break its shield as quickly as you can with the correct ability, and they regrow after a short while. Guacamelee’s enemy design doesn’t exactly adjust for this well, and it doesn’t take much for arenas to turn into a white-knuckled clusterfuck in the worst possible way. Every arena is pretty doable after a few tries, but they bring the game to a grinding halt every time and stick out next to boss fights as the most difficult portions of the game by a huge amount. If arenas were optional and offered great rewards, I’d be commending them, but as they stand, they’re enraging roadblocks that served only to hamper my already dwindling desire to play the game.

The exploration elements are also undeserving of praise. I call it a Metroidvania-lite for good reason: exploration is virtually non-existent, and backtracking-with-new-abilities doesn’t tend to get you anything but a room full of resources unless you’re backtracking down the critical path. Guacamelee is an entirely linear, and quite short, game. It’s a Metroidvania in spirit only, and only seems interested in conjuring nostalgia for the genre instead of actually being a solid addition to it.

The game chronicles the journey of Juan, a lowly agave farmer (what the hell is an agave?) as he comes to be a hero and rescue the princess/love interest/only reason he feels moved to save the world. It’s hardly a heavyweight in the story department and it hardly needs to be, but when it comes to the actual words on the screen, Guacamelee’s writing goes from passable to downright terrible. I had to check the release date at first, because the level of empty meme references seems indicative of a game released a lot earlier than April 2013. You know it’s time to go back to the drawing board your antagonist ends a rousing speech with a chorus of “Trolololol!”. It’s extremely annoying and only gets worse throughout the first several hours of the game, but luckily, text in general peters out around the half-way point. 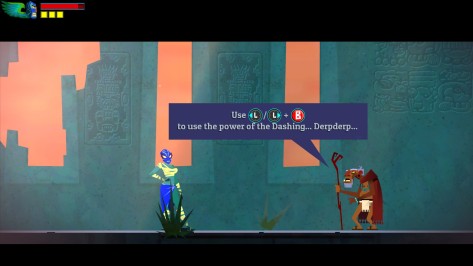 The writing may be some of the worst since Borderlands 2, but Guacamelee has plenty of style to make up for it. The game’s art is basically beautiful, and unlike anything I’ve ever played, if only for the Mexican flourish. There’s plenty of bloom and more advanced lighting effects that make it feel just barely 3D, and the 2D sprites are still incredibly eye-catching. It’s easy to say that its art is one of Guacamelee’s most well thought-out aspects. The music is no slouch either and is actually really great, especially the spacy dark world tracks. Naturally, it’s all very Mexican-themed and exceptionally composed.

Clearly a lot of effort went into developing Guacamelee, but it never stops feeling like the vast majority of that effort went into its art and its music. It’s painful to say that none of Guacamelee’s shining moments save it from being an unentertaining game. Its core elements are pervasively undercooked, and its gameplay is often too frustrating and simple to really enjoy. I could only really recommend Guacamelee to “indie game people” – the kind of people who watched Bytejacker and Co-Op and make a habit of buying the aforementioned $15 indie hoi oligoi. Personally, I felt no drive to make progress outside of the need to complete it for review, and if I was playing it more recreationally I probably would have stopped less than half way through the game. There just isn’t enough to it that I can see, outside of the mostly-well-designed combat, to keep someone actually wanting to play it. 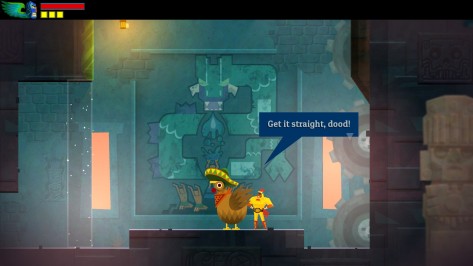 Ethics Disclosure: This game was purchased by the reviewer

Guacamelee: Gold Edition can be purchased from GOG, Steam, directly from the developer’s website, and from PlayStation and Xbox’s respective stores.