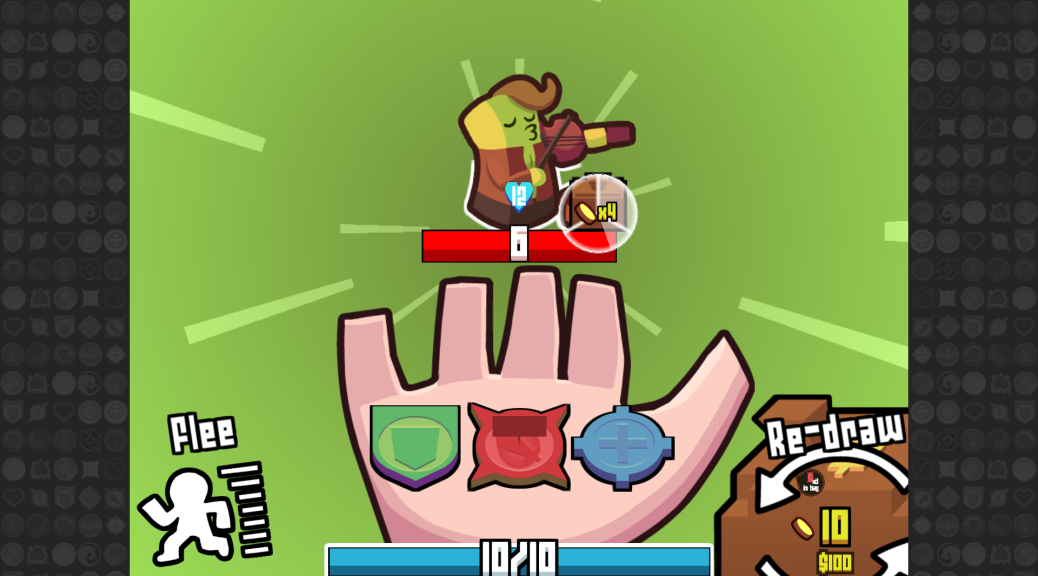 Coin Crypt is the embodiment of a certain tier of indie game. These games are no Bastion or Hotline Miami, that transcend the stigma of the term “indie game” and stand out as some of the best in their genre, but they’re no Lifeguard either. They’re the games that strip a genre to its core elements, coking it up a little and costuming it in a retro art style. In so doing, though, they often cut themselves out of any of the depth and complexity needed to be particularly gripping for more than a session or two. Coin Crypt stands out as the epitome of losers here.

It’s essentially a deck building game, with no fluff whatsoever for that indie game shine. You collect cards for your deck, called “coins” here, that have some basic effects like “Hit 4”, and some more interesting ones like “Enemy drops a coin, but you lose 2 health” for example. These coins are inside various chests and other containers throughout the game, and you also get your enemy’s coins when they die. Aside from losing all your health, the other death condition is losing all your coins, a mechanic that ripples through the game in the form of shops you have to spend coins in, statues you can donate coins to for hopes of some ambiguous reward later, and Steal coins that allow you to sap your enemy’s coins and starve them out. 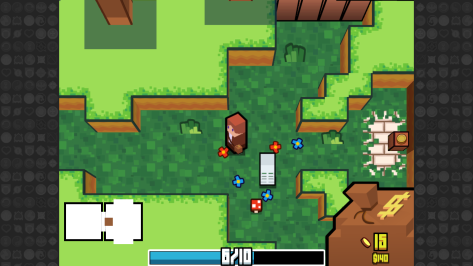 Enemies are scattered throughout the randomly-generated levels and aggro to you on sight like a Pokemon trainer. This opens up a really cool battle screen that reminds me of Earthbound. You draw coins and stacks of like coins from your backpack, and throw them frantically at your opponent to achieve one of their death conditions.

The game’s speed is one of its major downfalls. Battles take place in real-time, and move very swiftly – too swiftly, in fact, to be able to tell what’s going on. This, on top of a near complete lack of instruction, make the first 20 minutes or so a nightmare until you resign to watching a YouTube video about it. Even after you have an idea of what’s going on, battles are still hard to follow as there’s barely any time to look and see what’s happening besides your health going down, and playing offensive coins whenever they land in your hand. Random spam is further encouraged by the fact that text frequently covers coin descriptions, and with the game moving as quickly as it does, there’s not much time to wait for it to go away.

Outside of combat, there’s barely anything to fill the void from fight to fight. Occasionally you’ll come across shops, but the items are often too expensive to feel worth the precious coins if you don’t have plenty of throwaways. There’s totems, statues and wishing fountains scattered around but their rewards are too vague to feel worth anything but dumpsters for your trash coins. Outside of these two forms of coin dump and enemies, there isn’t much else populating the (very small) levels. 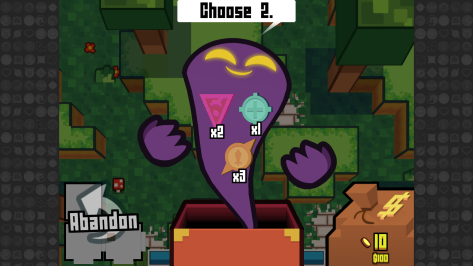 Between deaths you have the opportunity to choose a new character, and most of the characters do have some pretty significant effects. The Gunslinger casts faster but can’t stack coins or redraw for better ones, and the Witch uses every coin twice, but drops a random one every time. The game manages to mess even this up, however. Every time you die, a screen comes up giving you three options of which character class you’d like to allocate money toward unlocking. It doesn’t tell you about the character’s actual stat changes, however, so you’re really just blindly spending money.

What Coin Crypt lacks in polish mechanics-wise, it makes up for style-wise. It sports an almost-voxel art style and the enemy designs are downright quirky. I’m especially a fan of the ghost that pops out of chests and gives you coins, pictured above. There doesn’t seem to be a great many music tracks, but the ones there are pretty catchy themes that don’t ever grow old or repetitive, like all music should in this kind of game.

I’d go on, if only there was more to go on about. There isn’t much to this game, and what little there is is only fleetingly engaging. It undermines itself at every turn, changing what should be a charming twist on a deck-building game into a typical indie mess. Developers, take some notes. Customers, move on.

Ethics disclosure: The reviewer was provided a review code from the developer.

Coin Crypt is available for purchase on Steam.

One thought on “Coin Crypt Review”