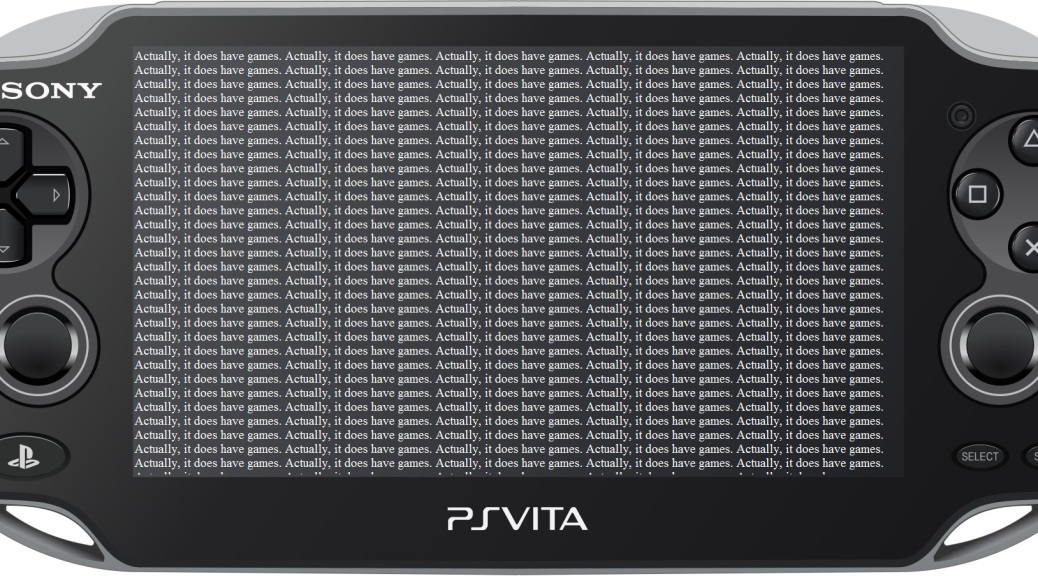 I stood in line just last Friday holding a used Vita in my hands, looking at the small stack of games I had picked out and the PS4 bundles on the shelf for roughly the same price. I wondered if I would quickly regret my decision to make the purchase I was about to make.  However, over the course of this past week I’ve spent more time with my Vita than I have my 3DS I adored so much when I got it nearly a year ago.

Since I first saw the twin stick beauty that was the Vita, I had always wanted one. Handheld consoles had always sat well with me. I somehow manage to spend more time with the small consoles in my hand than I do the full blown guys, including the PS3 I was so excited to get a few years back.  What was I getting here though that was so special in comparison to everything else I’d ever held? Cheesy as it might sound one word came to mind.

Sony knew what they were doing and enjoyed exactly what they were doing and so do most of the developers who make the games for it and of course the people who actually went out and bought the system itself. The people knew what they wanted and the developers made it happen. Portable Persona 4 with more additions to it to make it the literal best way to play the game? Awesome! That’s a way to sink a lot of hours. You like Uncharted and Killzone? He’s some full scale Uncharted and Killzone.  It’s really like having something between and PS2 and a PS3 in your hands, something that people were wanting when we got the PSP. While that happened to deliver on many of the fronts we had thrown at Sony, it wasn’t as damn good as the Vita had turned out to be.

I ended up walking out of the store with the Vita, Danganronpa (a game I had previously played on the PSP but was happy to purchase again), Persona 4 Golden, Soul Sacrifice, Freedom Wars and an almost shameful copy of Senran Kagura Shinovi Versus ‘Let’s Get Physical’ Edition. I walked home as fast as I could to plug this thing in, update it and get it rolling. I was greeted by a small introduction to the system as a cheery tune played in the background, many bright colors showing themselves off on the wonderful 5 inch OLED screen. Anyway, setup was done and it was time to pop into a game. I opted to check out Persona 4 Golden first.

Albeit, I haven’t played much of this game to this day, it has clearly shown to me that it’s the best example of what the Vita is capable of. Bright colors, excellent textures and solid looking models running at a steady frame rate put an instant smile to my face. Nothing was comprised from the original PS2 release of the game. In fact, more was added to it to make it the better way to experience the game. I had been told that it was something to behold, and I didn’t really think the smile on my face of having a portable Persona that looked and played so good would be so large.

The other games were also great plays and continue to be, however, no summaries of those because we’re here to talk about my new, sleek, twin sticked, bright and cheery wife. Long days and long nights were spent with the system and continues to be something that I pick up daily. I thought things would slow down once I got a PS4, but because of the fact that I can use my Vita as a controller/screen for my PS4, it still is practically glued to my hands. I continue to purchase games for it, enjoy the PS+ titles that come each month, and I hope that the Vita gets just as many years of use my PSP did, if not more.

There are lots of handhelds on the market that provide great experiences across the Android and iOS platforms, however, nothing has come close to anything I’ve played on the Vita and I don’t think anything will for quite a long time. The feel of the clicky buttons, the short analog sticks that actually feel like they won’t break from general use and don’t suck, the excellent forward facing speakers and of course, the large 5 inch screen that is not only great for playing the Vita exclusive titles, but for watching my Anime. It shines bright above the competition and already has dethroned the amount of use that was previously held by my 3DS for a handheld… within a week.

In short: The Vita is the best handheld device I’ve ever put where it belongs, in my hands. Everything looks great, sounds great and runs great. You should buy one. This was one of my most memorable weeks I’ve ever had in my many, many years of gaming. A month later it still feels like a new and exciting when I pick it up.

Personal Disclosure: You should be thankful I stopped it where I did. I was gonna take the honeymoon week to a too-close-to-what-the-word-honeymoon-means-approach a little too far.

Ethics Disclosure: I bought it with my own money and I’m proud of my purchase.