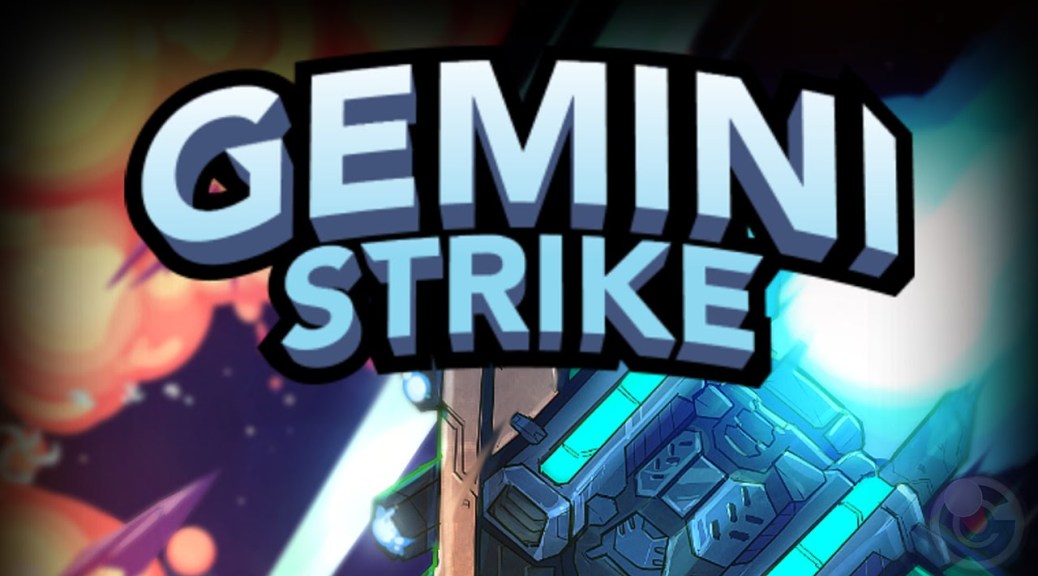 A couple of months ago I posted about a wonderful app I’d found, Terra Battle, that was the only really good phone game I had played since Jetpack Joyride. Well, in a burst of emotion and for reasons I can’t recall, I deleted the app. I’ve decided that I’m just going to wait until I get an Android phone to restart that game, and in the meantime I’ve been on the hunt for something to tide me over. Gemini Strike seems cool.

There’s a purity in Gemini Strike’s no-fuss approach to mobile shoot-em-up that I can respect. It’s nothing but a bullet hell with microtransactions. Levels are short and it’s instantly playable. The action is fast, frantic and ramps up quickly. I’m finding myself at a loss for more words to describe the way this game plays, so I’m not going to fill space expounding on this – this game is solid bullet hell. On your phone. If you’re into that shit, this game works. Your ship moves, fires, sometimes fires an ability every X seconds, and dodges dozens of bullets a second. It’s great. It would be more remarkable if it wasn’t great.

The only fucking-around Gemini Strike has done so far is to offer a deluge of conversation between characters, practically around every corner. The entire conversation is skippable at any time, but in my book, that doesn’t give it a free pass to pop up conversations at the beginning, middle, and end of a criminal amount of missions.

The story does, however, seem surprisingly interesting (which entices me to pay attention to every menial little conversation…). The premise concerns cloning – skilled pilots selling their identities to the military to be cloned infinitely and sent into battle, while the real pilot relaxes on a beach someplace warm. Assuming the game uses this premise for more than just a premise, it could be a pretty cool.

It’s also a very pretty game. Buttons are responsive, animations are tight and bouncy, and the playing field is drowned in color as it should be. The game is very neatly presented on the whole, and feels like a quality game. Menus can so often feel robotic and clunky on mobile, but Gemini Strike sidesteps that trap completely.

One area where the game unfortunately falters is in the microtransactions. The situation is pretty dire. You’re given one life to finish a level with, and any extra lives beyond that must be purchased on death using one Credit, which is the game’s fairly steep premium currency. Credit can be gained painfully slowly by doing occasional side missions that appear, but again, you’re only given one chance to complete these before you have to start spending and these missions are typically even more difficult than the story missions.

Add to this the fact that your dumb finger is going to be in the way 100% of the time, and you start to feel like the game is taking advantage of its suboptimal environment on a cell phone in order to drain your wallet. More options for health retrieval mid-mission would go a long way to helping this game playable when it sometimes isn’t. Or, hell, even being able to use one of your four rechargeable lives you deplete on death to revive yourself would work.

Credits can also be used a few at a time to open boxes containing powerful items, and to buy better ships. These ships however, cost anywhere from 7 to 35 credits, a sum you’re not likely to ever reach relying on being doled out free currency. You’re only given one measly credit for completing an entire chapter of the game’s story mode.

When it comes to having a couple minutes, though, Gemini Strike is my go-to game at the moment. If you look at the long run, you’ll see that this game is totally fucked, but I haven’t usually found that I’m dying for reasons that credits could buy off. Maybe the frequency with which you’re given credits ramps up after a while, who knows. I’m sure I’ll find out, because I suspect I’m going to get there. Gemini Strike is just a free-to-play shoot-em-up. That’s really all it is, but sometimes a game that is “just” something can be very welcome, and in this case, Gemini Strike is currently very welcome on my phone.